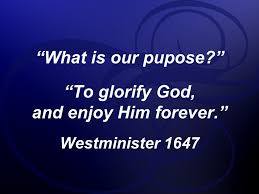 A1: Man’s chief end is to glorify God, and to enjoy Him for ever.

Q4: What is God?
A4: God is a Spirit, infinite, eternal, and unchangeable, in his being, wisdom, power, holiness, justice, goodness, and truth.

Q5: Are there more Gods than one?
A5: There is but one only, the living and true God.

Q6: How many persons are there in the Godhead?
A6: There are three persons in the Godhead; the Father, the Son, and the Holy Ghost; and these three are one God, the same in substance, equal in power and glory.

Q7: What are the decrees of God?
A7: The decrees of God are, his eternal purpose, according to the counsel of his will, whereby, for his own glory, he hath fore-ordained whatsoever comes to pass.

Q10: How did God create man?
A10: God created man male and female, after his own image, in knowledge, righteousness, and holiness, with dominion over the creatures.

Q12: What special act of providence did God exercise toward man in the estate wherein he was created?
A12: When God had created man, he entered into a covenant of life with him, upon condition of perfect obedience; forbidding him to eat of the tree of the knowledge of good and evil, upon the pain of death.

Q14: What is sin?
A14: Sin is any want of conformity unto, or transgression of, the law of God.

Q17: Into what estate did the fall bring mankind?
A17: The fall brought mankind into an estate of sin and misery.

Q19: What is the misery of that estate whereinto man fell?
A19: All mankind by their fall lost communion with God, are under his wrath and curse, and so made liable to all miseries in this life, to death itself, and to the pains of hell for ever.

Q22: How did Christ, being the Son of God, become man?
A22: Christ, the Son of God, became man, by taking to himself a true body, and a reasonable soul, being conceived by the power of the Holy Ghost, in the womb of the Virgin Mary, and born of her yet without sin.

Q23: What offices doth Christ execute as our Redeemer?
A23: Christ, as our Redeemer, executeth the offices of a prophet, of a priest, and of a king, both in his estate of humiliation and exaltation.

Q31: What is effectual calling?
A31: Effectual calling is the work of God’s Spirit, whereby convincing us of our sin and misery, enlightening our minds in the knowledge of Christ, and renewing our wills, he doth persuade and enable us to embrace Jesus Christ, freely offered to us in the gospel.

Q33: What is justification?
A33: Justification is an act of God’s free grace, wherein He pardoneth all our sins, and accepteth us as righteous in His sight, only for the righteousness of Christ imputed to us, and received by faith alone.

Q34: What is adoption?
A34: Adoption is an act of God’s free grace, whereby we are received into the number, and have a right to all the privileges of the Sons of God.

Q35: What is sanctification?
A35: Sanctification is the work of God’s free grace, whereby we are renewed in the whole man after the image of God, and are enabled more and more to die unto sin, and live unto righteousness.

Q37: What benefits do believers receive from Christ at death?
A37: The souls of believers are at their death made perfect in holiness, and do immediately pass into glory; and their bodies, being still united to Christ, do rest in their graves till the resurrection.

Q38: What benefits do believers receive from Christ at the resurrection?
A38: At the resurrection, believers being raised up in glory, shall be openly acknowledged and acquitted in the day of judgement, and made perfectly blessed in the full enjoying of God to all eternity.

Q47: What is forbidden in the First Commandment?
A47: The First Commandment forbiddeth the denying, or not worshipping and glorifying the true God, as God, [and our God,] and the giving of that worship and glory to any other which is due to Him alone.

Q49: Which is the Second Commandment?
A49: The Second Commandment is, “thou shalt not make unto thee any graven image, or any likeness of any thing that is in heaven above, or that is in the earth beneath, or that is in the water under the earth, thou shalt not bow down thyself to them, nor serve them: for I the Lord thy God am a jealous God, visiting the iniquity of the fathers upon the children, unto the third and fourth generation of them that hate Me; and showing mercy unto thousands of them that love Me, and keep my commandments.”

Q57: Which is the Fourth Commandment?
A57: The Fourth Commandment is, “Remember the Sabbath-day, to keep it holy. Six days shalt thou labour, and do all thy work: But the seventh day is the sabbath of the LORD thy God: in it thou shalt not do any work, thou, nor thy son, nor thy daughter, thy manservant, nor thy maid- servant, nor thy cattle, nor thy stranger that is within thy gates: For in six days the LORD made heaven and earth, the sea, and all that in them is, and rested the seventh day: wherefore the LORD blessed the sabbath day, and hallowed it.”

Q60: How is the Sabbath to be sanctified?
A60: The Sabbath is to be sanctified by a holy resting all that day, even from such worldly employments and recreations as are lawful on other days; and spending the whole time in the public and private exercises of God’s worship, except so much as is to be taken up in the works of necessity and mercy.

Q61: What is forbidden in the Fourth Commandment?
A61: The Fourth Commandment forbiddeth the omission or careless performance of the duties required, and the profaning the day by idleness, or doing that which is in itself sinful, or by unnecessary thoughts, words, or works, about our worldly employments or recreations.

Q64: What is required in the Fifth Commandment?
A64: The Fifth Commandment requireth the preserving the honour, and performing the duties, belonging to every one in their several places and relations, as superiors, inferiors, or equals.

Q81: What is forbidden in the Tenth Commandment?
A81: The Tenth Commandment forbiddeth all discontentment with our own own estate, envying or grieving at the good of our neighbour, and all inordinate motions and affections to any thing that is his.

Q83: Are all transgression of the law equally heinous?
A83: Some sins in themselves, and by reason of several aggravations are more heinous in the sight of God than others.

Q87: What is repentance unto life?
A87: Repentance unto life is a saving grace, whereby a sinner, out of a true sense of his sin, and apprehension of the mercy of God in Christ, doth, with grief and hatred of his sin, turn from it unto God, with full purpose of, and endeavour after, new obedience.

Q89: How is the Word made effectual to salvation?
A89: The Spirit of God maketh the reading, but especially the preaching of the Word, an effectual means of convincing and converting sinners, and of building them up in holiness and comfort, through faith, unto salvation.

Q92: What is a sacrament?
A92: A sacrament is an holy ordinance instituted by Christ, wherein, by sensible signs, Christ, and the benefits of the new covenant, are represented, sealed, and applied to believers.

Q94: What is baptism?
A94: Baptism is a sacrament, wherein the washing with water in the name of the Father, and of the Son, and of the Holy Ghost, doth signify and seal our ingrafting into Christ, and partaking of the benefits of the covenant of grace, and our engagement to be the Lord’s.

Q96: What is the Lord’s supper?
A96: The Lord’s Supper is a sacrament, wherein, by giving and receiving bread and wine, according to Christ’s appointment, his death is showed forth; and the worth receivers are, not after a corporal and carnal manner, but by faith, made partakers of his body and blood, with all his benefits, to their spiritual nourishment, and growth in grace.

Q98: What is prayer?
A98: Prayer is an offering up of our desires unto God for things agreeable to his will, in the name of Christ, with confession of our sins, and thankful acknowledgement of his mercies.

Q99: What rule hath God given for our direction in prayer?
A99: The whole Word of God is of use to direct us in prayer; but the special rule of direction is that form of prayer which Christ taught his disciples, commonly called The Lord’s Prayer.

Q101: What do we pray for in the first petition?
A101: In the first petition, which is, “Hallowed be thy name,” we pray, That God would enable us and others to glorify him in all that whereby he maketh himself known; and that he would dispose all things to his own glory.

Q103: What do we pray for in the third petition?
A103: In the third petition, which is, “Thy will be done in earth, as it is in heaven,” we pray, That God, by his grace, would make us able and willing to know, obey, and submit to his will in all things, as the angels do in heaven.

Q104: What do we pray for in the fourth petition?
A104: In the fourth petition, which is, “Give us this day our daily bread,” we pray, That of God’s free gift we may receive a competent portion of the good things of this life, and enjoy his blessing with them.

Q105: What do we pray for in the fifth petition?
A105: In the fifth petition, which is, “And forgive us our debts, as we forgive our debtors,” we pray, That God, for Christ’s sake, would freely pardon all our sins; which we are able to be rather encouraged to ask, because by his grace we are enabled from the heart to forgive others.

And, in testimony of our desire, and assurance to be heard, we say, Amen. 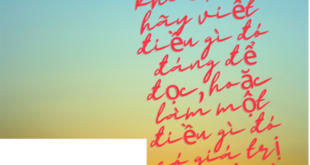 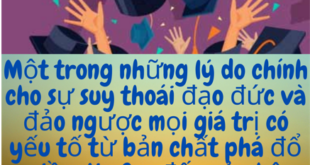 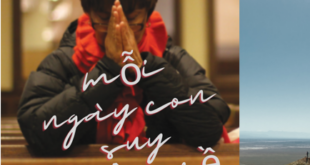